Returning to the streets of Hanley

Brexit. How's it going? We ask shoppers in Hanley

After almost two years of online campaigning, Zoom meetings and trying to glean the mood of the city from the polarised environment of social media and the stereotyped characterisations of most mainstream media we were finally going out onto the streets again. We were eager to discover, in their own words, how the citizens of Stoke on Trent think Brexit is going.

Our team met in the car park, from where we would carry our stall - a lightweight wallpaper table, an A2 “Brexitometer” board and a large plastic storage box full of leaflets, pens, badges and flags - to our usual site, a walk of a few hundred metres.

In next to no time our stall was set up by the Blue Clock, Hanley, outside the Potteries Centre main entrance and at the crossing point of two main pedestrian routes through the town.  It had all seemed much easier than we remembered.

But we had already started to notice some differences and it didn’t feel good. It was grey, dull and damp with a stiff breeze but not the bone chilling cold we remembered from the Tactical Voting campaign of November and December 2019.

Nearly 10:30am a month before Christmas and the town was very quiet to the point of being depressing.

The square and the usual busy street down from the car park were almost deserted. The absence of dodging and jostling with fellow pedestrians was what had made our trudge with the boards and boxes easy. We had set up in double quick time because no curious shoppers had interrupted to ask: what we were doing? what were we selling? which party were we? why were we there? 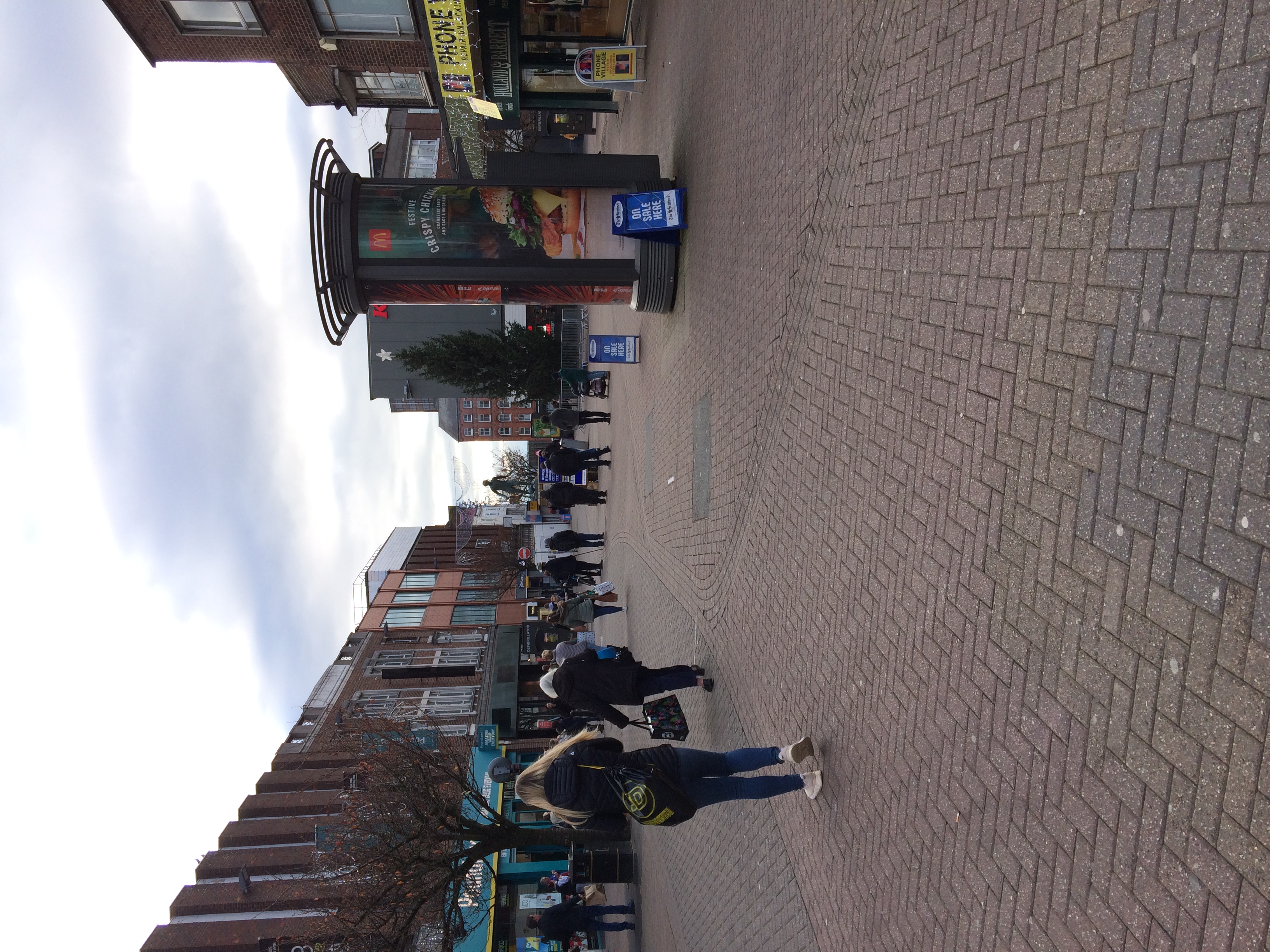 Since our last stall more shops, including the Marks and Spencer, had closed. The plant nursery - previously a regular Saturday feature in the square was missing, maybe because of the Christmas tree, but we were pleased to see the florist, his stall a sole patch of colour, still plying his trade with an array of reasonably priced festive arrangements.

After a very slow start footfall and visitors to our stall picked up a little around noon.

Looking around at the half empty streets they didn’t seem to be there.

Most of the shoppers gave the impression they were only in town because they needed to be. Head down, get on with it. No one on a fun day out. No time to stop for a chat. No dawdling window shoppers for the few windows left to shop in.

Glum decline? Even the Blue Clock had stopped. 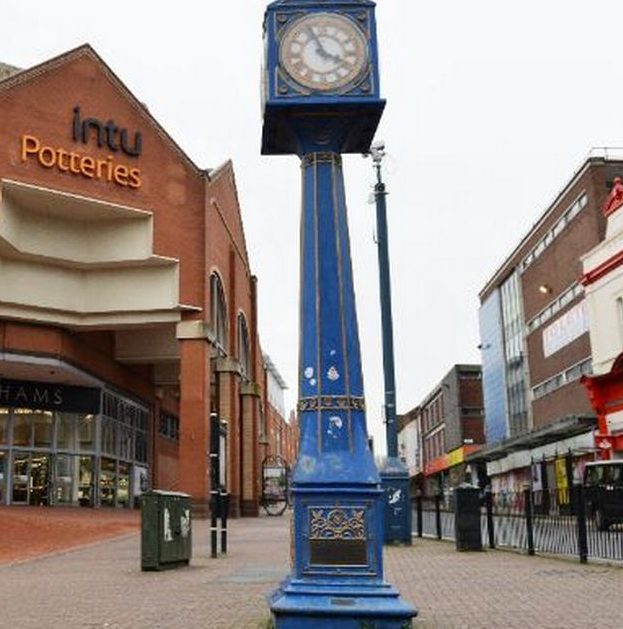 The regular PCSOs said it was even quieter than usual but they thought people who could afford to shop had got used to doing it online and were no longer coming in to town. Covid didn’t help. They had a point. Guilty as charged. We’d only been into the centre a handful of times since the pandemic started and were drowning under a mound of cardboard delivery boxes.

A lot (although not all) of those who stopped to talk to us and put stickers on our Brexitometer had voted remain or had been too young to vote. Fair to say that the remain voters had expected some damage from Brexit but were still surprised by the extent of the problems caused by Johnson’s deal.

“I didn’t want it in the first place, but I never thought it would be this bad”.

“It’s all gone wrong because it was built on lies.”

The handful of those who thought Brexit was a good thing couldn’t identify any tangible benefits although one said he was pleased we could now control our borders to keep out foreigners and was relieved that Angela Merkel no longer made our laws. The others muttered about immigration and borders.

A young lad - still too young to vote - said it was good we could keep our own fish but when we suggested the fishers might prefer to be able to sell them, he agreed and said “Yeah, suppose so,” amusing his mates.

One leave voter, more typical of the confident leave supporters we had seen in 2018 and 2019, was appalled that the government had forged ahead to “Get Brexit Done” with what turned out to be no plan, inadequate preparation, no debate on the consequences and in the middle of a pandemic.

In our earlier campaign for a follow up referendum and a final say on the actual deal one of our great frustrations had been our inability to overcome the “project fear” shield: the government wouldn’t do it if those claims were true. 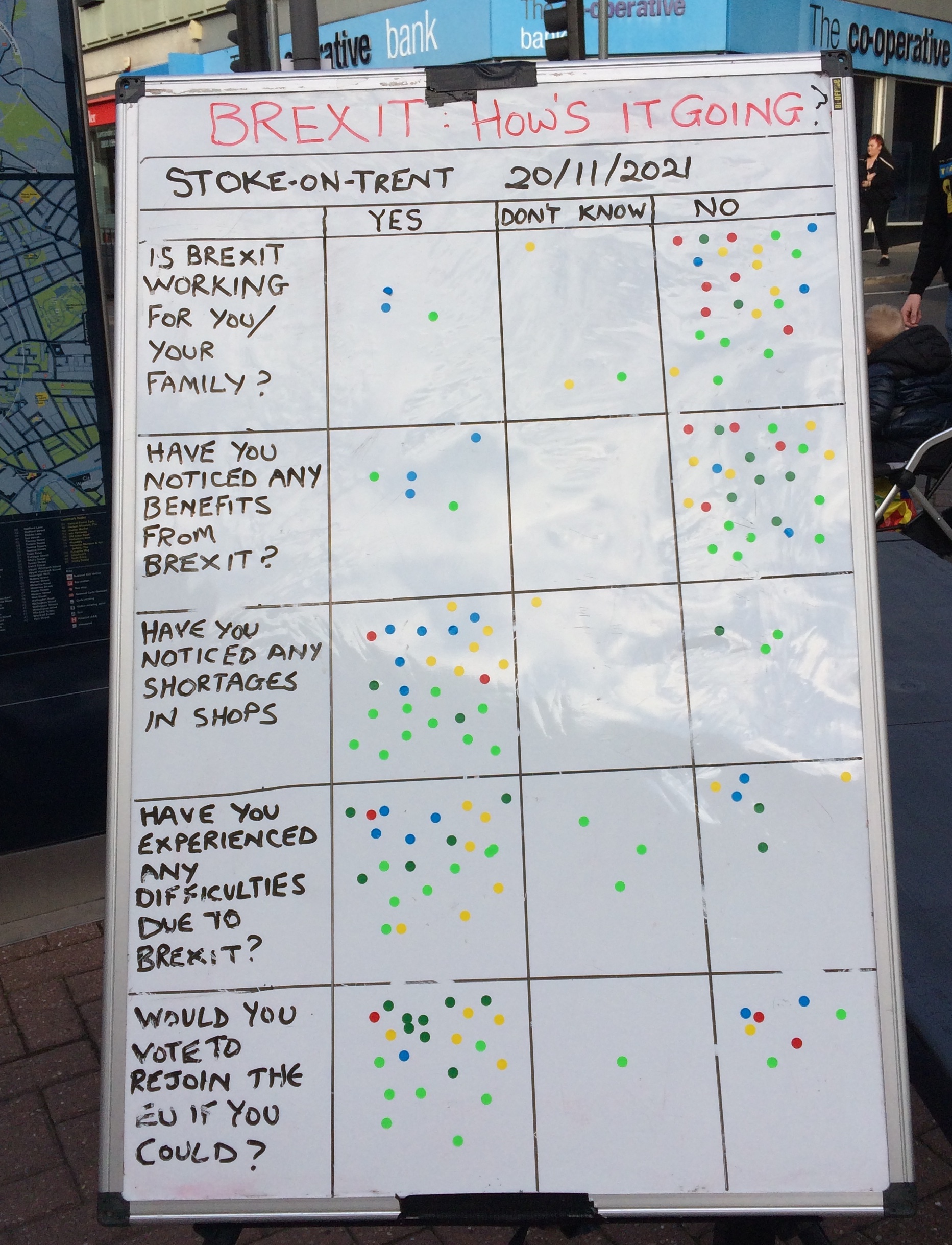 This faith in the government not to do damage may be changing.

One woman whose male companion was trying to think of Brexit benefits interrupted him and said “I’ve lived here for decades and I’ve never seen it this bad”.

Another person shouted across to us “It’s not just Brexit that isn’t working, nothing in this country is working”.

Someone else replied “Do I think Brexit is working? I’m glad I’m leaving the country”.

A large majority of those who responded to our Brexitometer survey, “Brexit How’s it going?” had noticed gaps on the shelves, lack of choice and price rises.  One man said he hadn’t been able to get everything on his shopping list for several months, “he’d survive,” he said, “but that wasn’t the point” and the price rises were worrying.

Some were still not sure whether Covid or Brexit was most to blame but the majority blamed Brexit for the shortages (labour, lorry drivers, additional red tape), the florist among them. He’s packing it in because Brexit has made it unviable. A little more colour and joy drained from the city centre.

On a brighter note, a much larger proportion of young people engaging with us, the majority students from the two local universities.

A phd student who had voted remain in the referendum had been directly affected by Brexit. He had secured a £40,000pa funded phd research post in Denmark. It was “all set up and ready to go” but then Brexit stopped it. He’d managed to find a similar post in Staffordshire, but it didn’t provide the international experience he’d been hoping for and it had less than 40% of the funding, which created some limitations.

Many of the youngsters had been too young to vote in 2016 and their plans had been made “post Brexit”. They couldn’t miss what they personally had never had but they were acutely aware that they did not have the same opportunities as their EU citizen counterparts.

A group of medical students was worried about Brexit’s impact on access to medical research, drugs and medical supplies. They were concerned about the future of the NHS. For them Brexit was only one aspect of what they appeared to think was a descent into chaos and disfunction.

“It’s chaos”, said one young man. As an overseas student observing us at close quarters he said “I’m not really affected and I don’t have a vote, but what is going on? No one seems to know what they are doing, or even why they’re doing it. They’ve created chaos”.

Chaos was a word that cropped up a lot from the young people.

It’s hard to say what the people in Hanley thought of Brexit but maybe it is significant that it was our first street stall when no one shouted “We voted out, get over it”.