“I enjoy a hobby where I show birds in the South of Ireland and on mainland Great Britain. If there is a hard border down the Irish Sea will I still be able to take my birds back and forth?”

On 16th October 2019 Desmond Horner, “Desy”, a joiner from Carrowdore, County Down, put that question to the panel on the Nolan Show. Their initial response was laughter, but his question was both serious and heart felt. What was at stake for Desy was his passion, his hobby, a major source of enjoyment in life.

Coming in the same week Boris Johnson’s renegotiated EU Withdrawal Agreement was published, his question was nothing if not topical.

Desy’s passion for poultry breeding was sparked when, as a child, he helped his mother hatch the chickens she kept for meat and eggs. By the time he was a young teenager he was breeding and showing them. He attended his first local show in 1977 and his first national show on mainland Great Britain in 1986.

Today his prized flock of White Wyandottes, Buff Pekins, Lemon Blue, Silver Blue and Brown Red Modern Game are bred and reared only for exhibition and their eggs are purely for reproduction.

When not preparing for a major competition, Desy spends about two hours a day tending his birds.

“I rear my chicks with hens, as mother nature intended, so it takes more time,” he explains adding that in the weeks before a big show it takes much more time as he needs to get them “100% fit and in perfect feather”.

Twice a year, every year since 1986, Desy has travelled from his home town to mainland Britain to take part in major national competitions.

After more than forty years he is a familiar figure in poultry breeding circles, an acknowledged expert, winner of many titles and a recognised competition judge, including as Championship Judge at the Scottish National in 2015.

Desy typically shows about 18 birds at the major two-day long shows but may take up to 50 as he provides birds to other breeders. Desy had been expecting to enjoy many more years of national competition on mainland Great Britain, both as competitor and judge, but he says that for hobbyists like him the regulations introduced as a result of the Irish Sea border make it practically impossible. Desy explained:

“When I first got my licence in 1986 we had to have our premises inspected and the birds tested. This was done before departure at a cost of £75 and was repeated on return. The vet filled out the forms and I took them to the local Department of Agriculture. After two years it was deemed unnecessary and an annual licence was issued.”

From the end of the Brexit transition period birds taken to shows on the mainland – or purchased from other breeders at the show – will need an Export Health Certificate issued after the show before they can be returned to Northern Ireland. A veterinarian must certify the birds have tested negative for salmonella and have been held in quarantine for at least 21 days. In some circumstances other conditions, including a potential 3 month residency requirement, must also be met.

The Department for Agriculture, Environment and Rural Affairs web page warns that NI show bird owners returning to NI may be asked for additional documentation and advises them to call for guidance before leaving NI. It is all very complex.

Jane Harnett who helps organise the Federation of Poultry Clubs Championship Show, held annually in Stafford, says that competitors from both Northern Ireland and the Republic of Ireland make a significant contribution to the show in terms of their numbers and the quality of the birds they show. She adds:

“It takes generations to breed the perfect bird. Breeders put their hearts and souls into it. They meet people and make friends at the shows. It is a really nice and friendly environment with people from all walks of life.”

“Many of the Irish breeders have been coming for years and they are quite well known. If this isn’t sorted and they don’t come it won’t be the same without them.  There’ll also be a financial impact on our show here in Stafford. We need people to sign the petition calling for a review”. 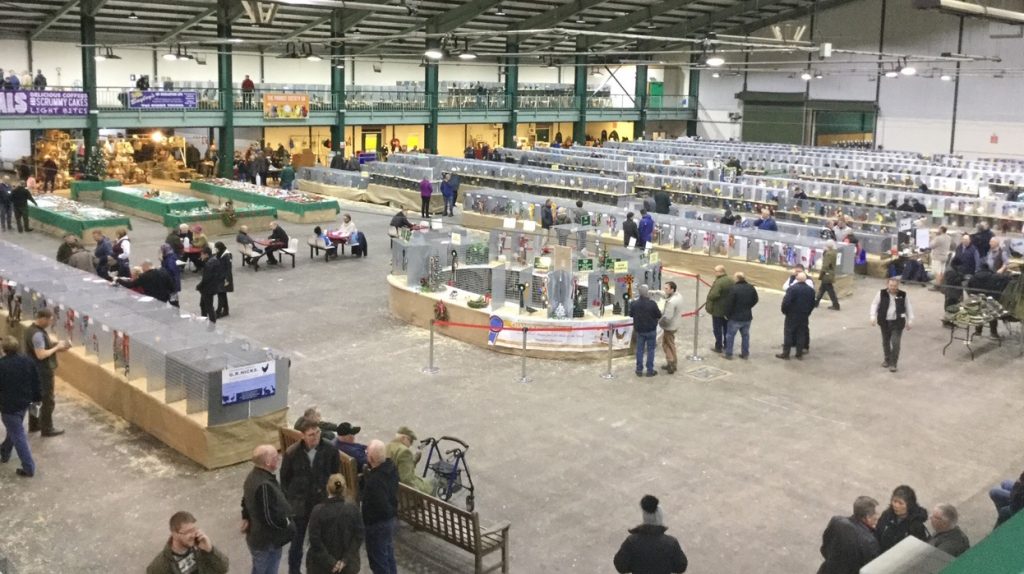 Desy is hoping that the government can find a solution which will allow hobbyists like himself to continue showing birds in Great Britain without all the red tape. As he stressed to the panel on the Nolan show, there is nothing commercial or agri-food business involved. “It’s a hobby!”.

Desy supports as many local shows as he can but losing the opportunity to show on the mainland will leave him feeling devastated.

“My main opposition is on the mainland, it’s a great way to meet and discuss with other breeders the good and bad points of the breeds.”

Without competition on the mainland he will reduce his breeding programme significantly and he doesn’t think he will be alone.

“I do believe it will reduce the numbers bred. Most of the breeds which are exhibited are indeed rare and possibly in the hand of only 14-18 breeders. So it is a real threat to traditional breeds in general.”

Despite raising concerns about the implications of a hard border down the Irish Sea in 2019, showing rather more understanding of Johnson’s Withdrawal Agreement than Johnson himself, Desy only became aware of the full impact in early January.

Since then he has been lobbying Northern Irish MPs and contacting local poultry clubs via social media. So far he has been met with concern and amazement but no solutions. He is not giving up. People need to see the human consequences of the Irish Sea Border.

Asked what he would say to Boris Johnson, Desy replies:

“I’d tell him that he and his colleague’s never took the time to inform the citizens of Northern Ireland what all would be involved in the sea border.”

Elizabeth Baker. This article is reproduced with the kind permission of West England Bylines